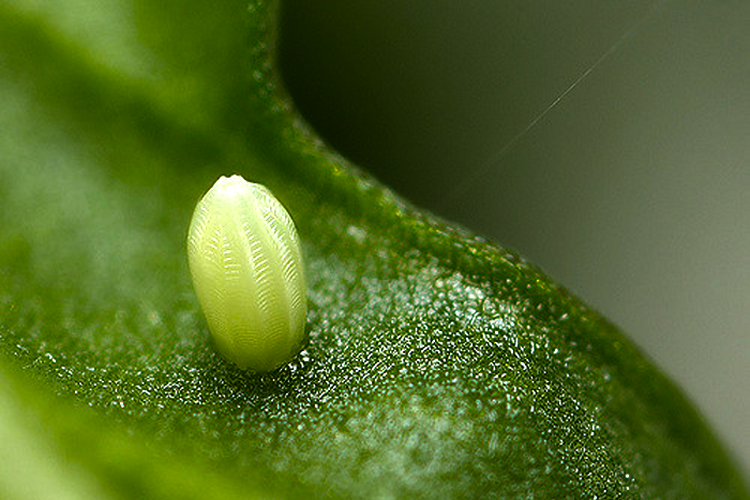 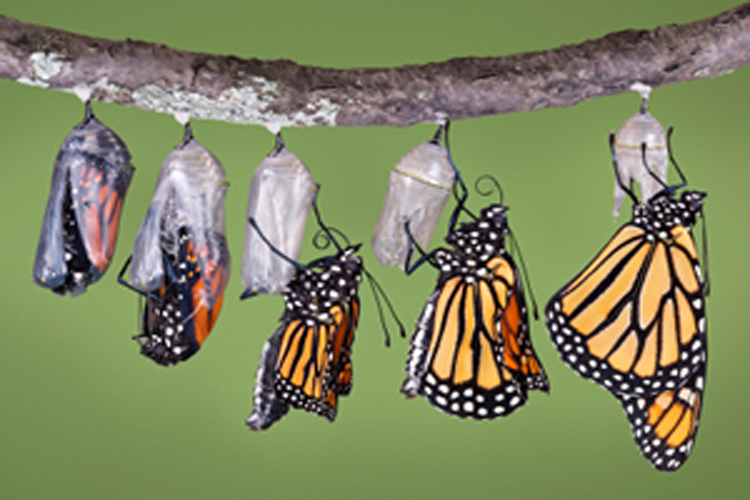 The monarch life cycle is quite amazing! Click the tabs below to learn more.

Monarch females usually lay a single egg on a milkweed plant, often on the bottom of a leaf near the top of the plant. Eggs are only about the size of a pinhead or pencil tip and are off-white or yellow, characterized by longitudinal ridges that run from the tip to the base. The eggs hatch about four days after they are laid.

As females lay their eggs, they secrete a small amount of glue to attach the eggs directly to the plant. Female monarch butterflies lay an average of about 700 eggs over two to five weeks of egg laying, with a record in captivity of 1179!

Each egg is formed inside the female prior to fertilization, including the hard outer shell, called the chorion, which protects the developing larva inside. The shell is lined with a layer of wax, which helps keep the egg from drying out. The eggs have tiny funnel-shaped openings at one end, called micropyles. These holes penetrate all the way through the shell allowing sperm to enter, since eggs form their hard shell prior to fertilization. The raised areas on the egg shell are called ridges, they are also formed before the egg is laid. The dark head of the developing caterpillar can be seen near the top of the egg prior to emergence.

Monarchs remain in the egg stage of their life-cycle for 3-8 days, depending on the temperature.

The word larva refers to the growth stage of all insects with complete metamorphosis. Caterpillar refers only to a butterfly or moth in this stage. Either word is correct, but most scientists say larva. It is during this stage that monarchs do all of their growing; in fact this is just about all that they do. These "eating machines" take few breaks even for resting.

Larvae, just like all other insects, have three distinct body parts: the head, thorax, and abdomen. The head has a pair of short antennae, mouthparts (upper lip, mandibles, and lower lip), and six pairs of simple eyes, called ocelli. Even with all of these eyes, the caterpillar's vision is poor. The antennae help to guide the weak-eyed caterpillar as it moves around, and the maxillary palps (sensory organs), help direct food into its jaws. The spinneret produces silk, which the caterpillar uses to anchor itself when needed and to create the silk pad it uses to hang from when it pupates.

Like other insects, monarchs obtain oxygen through holes in the sides of their thorax and abdomen called spiracles. The spiracles are connected to a network of long air tubes called tracheae, which carry oxygen throughout the body.

As the caterpillar grows and becomes too large for its skin, it molts, or sheds its skin. The head capsule is the first part of the old skin to come off during the molting process. Then the old skin peels back from the front of the caterpillar. At first, the new skin is very soft, and provides little support or protection. This new skin soon hardens and molds itself to the caterpillar.

The shed skin is often eaten before the caterpillar ingests more plant food! The intervals between molts are called instars.

The entire larval stage in monarchs lasts from nine to fourteen days under normal summer temperatures.

Just before they pupate, monarch larvae spin a silk mat from which they hang upside down. The silk comes from the spinneret on the bottom of the head. As it sheds its skin for the last time, the caterpillar stabs a stem into the silk pad to hang. This stem extends from its rear end and is called the cremaster.

While the process of complete metamorphosis looks like four very distinct stages, continuous changes actually occur within the larva. The wings and other adult organs develop from tiny clusters of cells already present in the larva, and by the time the larva pupates, the major changes to the adult form have already begun. During the pupal stage this transformation is completed. Many moth caterpillars (but not all) spin a silken cocoon to protect them as pupae. Butterflies do not do this, and their pupa stage is often called a chrysalis. While it is fine to refer to the previous stage as either larva or caterpillar, it is not correct to call a butterfly pupa a cocoon, since it does not have a silken covering.

Just before the monarchs emerge, their black, orange, and white wing patterns are visible through the pupa covering. This is not because the pupa becomes transparent; it is because the pigmentation on the scales only develops at the very end of the pupa stage. This stage of development lasts eight to fifteen days under normal summer conditions.

The primary job of the adult stage is to reproduce—to mate and lay the eggs that will become the next generation. Monarchs do not mate until they are three to eight days old. When they mate they remain together from one afternoon until early the next morning—often up to 16 hours! Females begin laying eggs immediately after their first mating, and both sexes can mate several times during their lives. Adults in summer generations live from two to five weeks.

Each year, the final generation of monarchs, adults that emerge in late summer and early fall, has an additional job. They migrate to overwintering grounds, either in central Mexico for eastern monarchs or in California for western monarchs. Here they spend the winter clustered in trees until weather and temperature conditions allow them to return to their breeding grounds. These adults can live up to nine months.

Male and female monarchs can be distinguished easily. Males have a black spot on a vein on each hind wing that is not present on the female. These spots are made of specialized scales which produce a chemical used during courtship in many species of butterflies and moths, although such a chemical does not seem to be important in monarch courtship. The ends of the abdomens are also shaped differently in males and females, and females often look darker than males and have wider veins on their wings.