Busy as a Bee 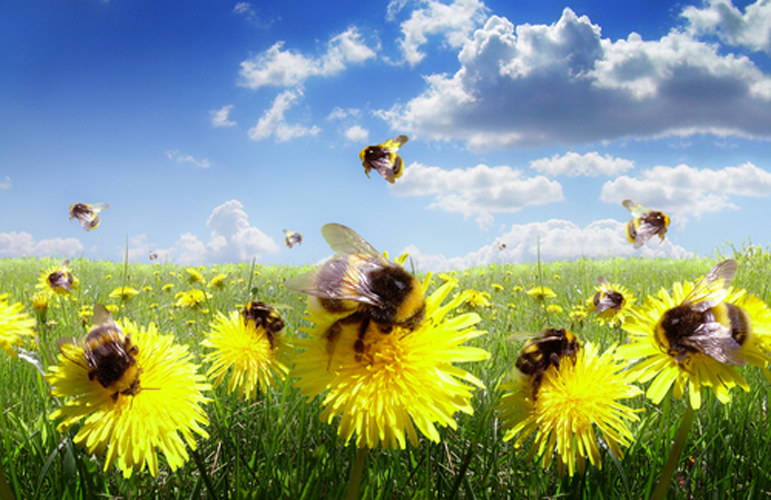 The honey bee is the only insect that produces food eaten by man.

Honey bees have 6 legs, 2 compound eyes made up of thousands of tiny lenses (one on each side of the head), 3 simple eyes on the top of the head, 2 pairs of wings, a nectar pouch, and a stomach.

Honey bees have 170 odorant receptors, compared with only 62 in fruit flies and 79 in mosquitoes. Their exceptional olfactory abilities include kin recognition signals, social communication within the hive, and odor recognition for finding food. Their sense of smell is so precise that it could differentiate hundreds of different floral varieties and tell whether a flower carried pollen or nectar from meters away.

The honey bee's wings stroke incredibly fast, about 200 beats per second, thus making their famous, distinctive buzz. A honey bee can fly for up to six miles, and as fast as 15 miles per hour.

The average worker bee produces about 1/12th teaspoon of honey in her lifetime.

One bee has to fly about 90,000 miles – three times around the globe – to make one pound of honey.

It takes one ounce of honey to fuel a bee's flight around the world.

A honey bee visits 50 to 100 flowers during a collection trip.

The bee's brain is oval in shape and only about the size of a sesame seed, yet it has remarkable capacity to learn and remember things and is able to make complex calculations on distance travelled and foraging efficiency.

A colony of bees consists of 20,000-60,000 honeybees and one queen. Worker honey bees are female, live for about 6 weeks and do all the work.

The queen bee can live up to 5 years and it's role is to fill the hive with eggs. She is the busiest in the summer months, when the hive needs to be at its maximum strength, she lays up to 2500 eggs per day. The queen bee has control over whether she lays male or female eggs. If she uses stored sperm to fertilize the egg, the larva that hatches is female. If the egg is left unfertilized, the larva that hatches is male. In other words, female bees inherit genes from their mothers and their fathers while male bees inherit only genes from their mothers.

Larger than the worker bees, the male honey bees (also called drones), have no stinger and do no work at all. All they do is mating. In fact, before winter or when food becomes scarce, female honeybees usually force surviving males out of the nest.

Only worker bees sting, and only if they feel threatened and they die once they sting. Queens have a stinger, but they don't leave the hive to help defend it.

The worker bees produce honeycomb which comprises hexagon shaped cells through the consumption of honey produced from the collected flower nectar. To produce one pound of beeswax, six to eight pounds of honey are ingested

During winter, honey bees feed on the honey they collected during the warmer months. They form a tight cluster in their hive to keep the queen and themselves warm.

North America has over 4,400 described species of native bees.

Bees start making honey, which is their food, by visiting flowers. They collect a sugary juice called nectar from the blossom by sucking it out with their tongues. They store it in what's called their honey stomach, which is different from their food stomach. When they have a full load, they fly back to the hive. While sloshing around in the honey stomach, the nectar mixes with enzymes that transform its chemical composition and pH, making it more suitable for long-term storage. When a honeybee returns to the hive, it passes the nectar to another bee by regurgitating the liquid into the other bee's mouth. This regurgitation process is repeated until the partially digested nectar is finally deposited into a honeycomb. The unique design of the honeycomb, coupled with constant fanning by the bees' wings, causes evaporation to take place, creating the thick, sweet liquid we know as honey. The bee then seals the comb with a secretion of liquid from its abdomen, which eventually hardens into beeswax.

The color and flavor of honey varies from hive to hive based on the type of flower nectar collected by the bees. For example, honey made from Orange Blossom nectar might be light in color, whereas honey from Avocado or Wildflowers might have a dark amber color. In the United States alone, there are more than 300 unique types of honey produced, each originating from a different floral source.